I went to the movies with friends last Monday night to see Hitchcock. I liked it, but didn't love it...I suppose that was bound to happen. I wanted to love it, I am a fan, huge fan, and whilst I did not have high expectations, I did have some expectations...unsure what they were but the film did not meet them. That is not to say it is bad.

I felt Hopkins (whom I adore) was not a good enough Hitch, I knew he was never going to look like him, but had heard a grab of his voice in the trailers and figured that would do it...it did not and it was not as good as those snippets. Hitchcock's voice was more booming, fearful, and resounding with that perfect touch of humour and an internal wink of eye...Hopkins just didn't get it, well, at least not consistently.

I also found Mirren's Alma a little off base too. She shone in every scene, stealing it from Hitchcock, and whilst we all know she was the woman behind the man, from what I have read that is not how she positioned herself. She was a little bit more stitched up than portrayed.

And I think that was it, you never for a moment forgot it was Helen Mirren and Anthony Hopkins...not what you need on a biopic, and not one as important (to me and I suspect others) as this.

The remaining supporting cast were wonderful, in particular Scarlett Johansson as Janet Leigh - she nailed it, as did James D'Arcy as Anthony Perkins and Jessica Biel as Vera Miles. Toni Collette also a stand out as Peggy Robertson, Hitch's production assistant.

What I loved about the film - there was much to love - was the intricacies of film making, a lot of it ground breaking. This is where the film shone and there should have been more of it. The direness of finding that perfect new subject matter, keeping it secret (would never happen today), the casting, the types of shots used, the soundtrack, the shower scene. From my reading of Hitchcock I know there was a lot more to it than shown in this film...an opportunity lost and a shame.

If you are a fan I still recommend it, there will be scenes that just make you smile. It was a good film, just not great and the master of suspense deserves great!
Posted by Cathy at 6:58 PM 2 comments: 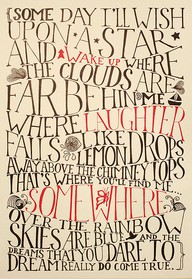 Before starting afresh in 2013 it's good to review the year that has now gone.


2. Reorganize my study - this may take me all year


3. Have one night a week where I turn off all electronics and read


4. Walk more and explore my own surroundings...there is so much I haven't seen in Newcastle, Lake Macquarie and other areas nearby


5. Read more of my own books. I tend to purchase these, but they get pushed aside for books I bring home from work


6. More live music - the very poor list above is very abnormal for me. I'm open to pretty much anything, though snooty about venues!


7. Learn to cook 5 basic, healthy meals I can whip up easily


8. Don't let the things that usually bother me, irritate me too much


9. Go on a picnic, cannot remember the last one I had


14. Whip my little backyard back into shape


17. Mini breaks to my favourite places - Melbourne (not been since 2011!!), The Blue Mountains, Mid North Coast, and try new ones


18. Pamper myself more including have regular soaks in the tub


20. Get through my list of local restaurants and cafes


23. Spend more time with my niece and nephew


26. Go to the farmers markets regularly


27. Really listen to music...eg in the dark with a glass of something something...no distractions


29. Rearrange, redecorate and spruce up my place


30. Say no or at least I'll need to get back to you on that one to the people I always say yes to that usually let me down


32. Live up to my Librarian of Leisure handle


34. Make sure those that mean the most to me know that they do


36. Take time to do nothing and daydream more often


38. Finish knitting the scarf I started 3 winters ago


42. Surprise myself
So, thank you to everyone who joined me on my 2012 journey. Your friendship, company, love and support helped me through the bad times and made the good times even more enjoyable.
Here's to a wonderful 2013, may all your dreams and wishes come true and I hope you will join me in completing my 42 things :)
Below is a gorgeous quote I found and used last year from one of my favourite authors, Neil Gaiman...it's timeless... 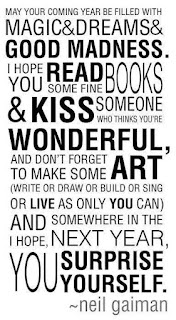