I recently chanced upon the filmclips to US Forces and Power and The Passion back to back. I had not seen the clips in years and oh how they took me back.


US Forces was my first experience with Midnight Oil, I was 12 and it was definitely a life changing moment for me as a not quite teen, politically and musically.
Watching the clip again I know I would have not really grasped exactly what it was about but it struck me hard, that I remember.
Firstly it was the music, I would have most certainly heard it before I saw it. That clear guitar riff had me hooked, as all clear guitar riffs have since, and the easily sung chorus and great melody.
Then there was that chanty, spoken word sort of section - it had, and still does have power and pull.
But the filmclip, set with the Lake Munmorah power station (I believe) and the backdrop transfixed me, or moreso the gorgeousness of drummer Rob Hirst, and the charisma and crazy dancing of one Peter Garrett. He was my new hero.  A tall, bald, kinda scary dude who danced in the most shocking but fabulous way. I still incorporate Garrett dance moves to this day - it gets looks, it creates space, and I simply don't care.
The lyric that intrigued me the most: "L Ron Hubbard won't save your life!" I pondered that for hours on end, Who was L Ron Hubbard, Why did my life need saving, and Why wouldn't he do it?
Scientology wasn't the thing it is now back then, funny huh?
This led to Power and The Passion, a staccato pop/rock tune that again had me transfixed, more crazy dancing with this band seemingly dumped in an obscure (to me at the time) backdrop and going about the business of playing the song regardless. Again Garrett moved with this Fuck Off stare that freaked out my sweet little mind, but I continued to watch as he literally danced to the bouncing beat of Rob Hirst's drum. I was definitely intrigued and a friend of Dad's taped me a copy of 10, 9, 8, 7, 6, 5, 4, 3, 2, 1 or 10-1 as everyone called it. I played that tape till it broke, every single song a gem. No one I knew - at that time - knew of or liked Midnight Oil. Story of my life, to be repeated over for many years until I found my flock!
The screamy lyric of Only The Strong, "When I'm locked in my room" sung to me in most certainly a way it was not intended.

After the one, two punch of Side 2 with US Forces and Power and the Passion, my other favourite tracks were Short Memory and Tin Legs and Tin Mines. I eventually replaced the broken tape with a vinyl copy. 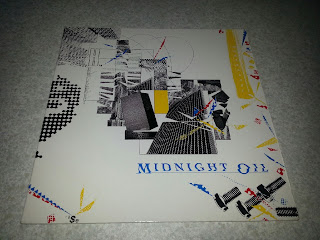 And then Red Sails in the Sunset was released. I had to have it and asked my grandparents for it for my 14th birthday! And they came up with the goods, I was very impressed. Imagine that, what must they have thought when they purchased that vinyl with the depiction of Sydney Harbour after a nuclear attack? Bless them, they bought it anyway. I loved this album with my very being, I was understanding the politics they represented more and was horrified about Nuclear War. I remember getting very angry about such things, and couldn't understand why everyone didn't see the sense in Nuclear Disarmament and so forth. 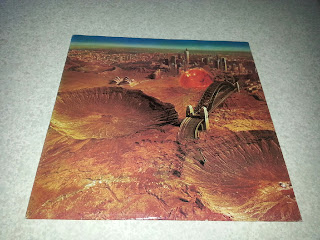 LOL, Peter Garrett made me a lefty!! Flash Forward to now, you have no idea the disappointment I feel in his political career...the less said the better...


Back to Red Sails in the Sunset. I remember clear as day the first time I played the album at home on my little turntable. I had heard it before at my grandparents, but had to keep it quiet etc and the experience was not so great. I loved the album but knew I had to play it loud to get it. So back home from our Christmas holiday (I am a Christmas baby, born on Boxing Day) I was home alone, put the vinyl on the turntable, lay on my bed and turned it up loud!! I remember the turntable under my front window, the lilac bedspread on my bed, the pale lace curtains that let me see the outside world without it seeing me (I was an odd little creature, we all are at 14 I think), my desk and books, the amazing built in cupboards in that room with my comfy old lounge chair, saved from when the family lounge got replaced, and my small collection of beloved vinyl.
From the first few beats of When the Generals Talk, the experience was loud, cranky and fantastic. Listening to both 10-1 and Red Sails today as I type this, they are great but lack the impact felt as a young 12-14 year old, suppose you can never really relive those first experiences. Back then I would have definitely rated Red Sails over 10-1, today I would reverse it. Red Sails wasn't as well received as 10-1 by the critics and as an adult I can see why. It's still a great album, 10-1 just seems to have lasted the ravages of time better.

I remember I had left my room halfway through side 2 and came back as Harrisburg started, and for those that don't know it starts with some weird deep breathing like sounds, I was certain something was in my room, the music started and those breaths were seemingly drowned out, I stood there hair standing up on end, thinking a ghoul was in my closet or outside the window. As the song continued I realised it was part of the song, and relieved collapsed back onto my bed.
Besides Generals, which does grab you, stand outs then and still today, my favourites are Kosciusko and Jimmy Sharman's Boxers.

Finally, to complete this tale of Midnight Oil, I played the third album in what I call The Classic Oils Trilogy, Diesel and Dust. Yes there are albums and EPs before and Albums since, but to me this trio are the essence of the Oils. Of course, I collected the entire catalogue on vinyl or CD, and love it all, though newer albums don't really appeal as much as the older stuff. 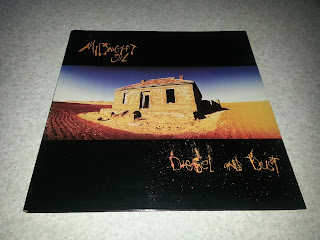 Diesel and Dust is the most celebrated of all Midnight Oil albums, it has won the most awards, was released at their peak and recently named in a book called, 100 Best Australian Albums, it was named No. 1! Whilst 10-1 still remains my favourite, this is their masterpiece, no doubt about it.


It came on the back of their touring the outback with Indigenous bands including The Warumpi Band, and the songs were mostly about reconciliation and packed a punch.
Beds are Burning is the song that caught the attention of the world, and became an anthem for the suffering of our Indigenous culture and peoples.
The lyrics were powerful, beats rhythmic, and songs generally anthemic, you can see why it is so loved. I was old enough to get and appreciate every single second of this remarkable album when it was released. Listening to it now, my feelings are much the same, maybe heightened when you listen to an album that is as fresh and sadly relevant now as it was some 25 years ago.

My favourite tracks were (and still are) Dreamworld, Sometimes, and Put Down that Weapon. Garrett never sounded better, the band sharp and tight. What I would have given to have seen them live at that very moment...

But alas I didn't, in fact I didn't see them live until well into the 90s. I am unsure why, quite possibly no one I knew really shared my love of Midnight oil. Anyway they played a multiple bill with a range of other Aussie bands at Newcastle Entertainment Centre, I think a tour for the drought? I cannot remember. What I do remember was their performance, burnt deeply into my memory.


It was a short but electrifying set, I danced up a frenzy, hands flailing a la Garrett and creating a very special space for myself on the dance floor. I know I was totally in my own world of extreme exhilaration to finally see this magnificent band and the songs moved me almost to tears. Live music is a powerful thing, get the timing right, with the right songs and the right emotions and it can send you into a trance that not experienced is difficult to truly understand or embrace....and of course explain. I am sure my sister can fill you in on her extreme embarrassment at my odd behaviour!
A few years later the same sister accompanied me to see Midnight Oil in full flight on the 20,000 Watt RSL Tour at Newcastle Workers Club (or whatever is was called in 1997/8). A proper concert and to support the Greatest Hits album of the same name, this was again brilliant. I remember they had a chocolate wheel with all the songs on and spun it to see what they would play next. I cannot remember what songs or even what order, but I can tell you they sounded better than their albums and their stage presence was out of this world. Garrett did not fail to impress with his movements, politics and incredible charisma.
It's funny to reminisce about something that is not that big a part of your life as it was over 20 years ago. I still love them and even moreso what they stood and still stand for. Midnight oil shaped my teenage years (along with many other things and of course other music) and began my political interest and my appreciation of humanity, animals and our world and that I think it a remarkable thing. And as disappointing as politics is at the moment, and Garrett himself has been, just think back to what he has achieved in his life thus far. Truly his idea for The Oils to wear Sorry tracksuits at the Olympic Games Closing Ceremony is one of the most brilliant displays of activism and deserved of sainthood alone. And the music stands up and represents a true Australia, the good and the bad, and it's been a blast going back and thinking of the musical inspiration Midnight Oil achieved for me. 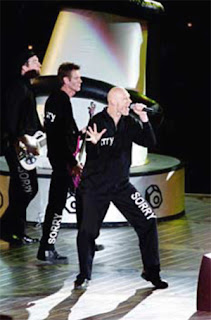 Well I feel the same, I heard them first time in 87, I was 17 and both their lyrics and their music had a profound effect in me. I just wrote a little article about them in my blog, sorry it's in french : http://www.ultramagnetique.com/midnight-oil/