What a lovely morning it was in Newcastle for Day 1 of the Newcastle Writers Festival. 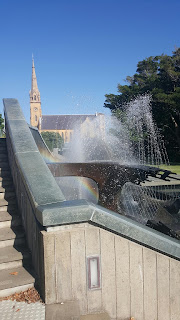 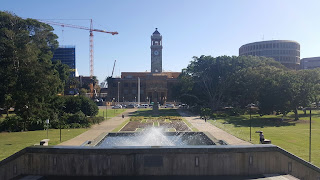 The first session of NWF16 was an interesting if at times dry session on Shakespeare. Called What's Special About Shakespeare and featuring Professor Hugh Craig, the deputy head of the Faculty of Education and Arts at the University of Newcastle. 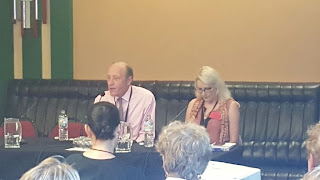 He wanted to show how exceptional Shakespeare was, if we had to prove it to martians that had just landed. His main theory on Shakespeare was his large vocabulary, and he had the numbers to back his theory.
An educated person uses 3000-4000 words, back in the day Milton, the poet about 8000 and Shakespeare himself around 15000, which is an utterly exceptional vocabulary.  In fact it is more like 25000. Craig then went on not to talk about many of the magnificent phrases and words Shakespeare invented but to show how he used basic words, eg To be or not to be. Perfect grammar, simple words, and huge philosophical resonance.

He referenced many post modern takes on Shakespeare, including the famous What would Cordelia do, eg if Cordelia was Desdemona, she would never have denied losing that handkerchief and therefore would not get herself into the drama she did by lying. This brought about much amusement within the room.
His other theory was Richard III is the ultimate normal character! Despite being a rogue and all round bad boy, his actual language matched that of other leading characters. His attitude and madness adds to the complexity of the character and makes him full and well rounded. All these things adding to Shakespeare’s specialness.
And so to be a good writer, much like Shakespeare, one should use the word My Lord more often (this phrase is used heavily within Shakespeare), avoid the word only (he doesn’t use it much) and place the word gentle (a firm favourite) here and there and ensure your characters talk of basic and normal things, no matter how deranged or complex they may be.
Session two was a Book Launch and Discussion on King Edward Park, Newcastle NSW: A History by Robert Evans.

Robert Evans was unfortunately unwell and unable to attend but Dr Ann Hardy who had assisted on the research of the book was there to talk about it. 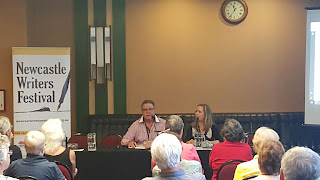 There are only a few Indigenous stories linked to King Edward Park in the early days. One is regarding Newcastle South Beach and falling rocks (nothing changes!), and how there were stories of the indigenous people walking swiftly along that route and holding their breath if they heard the noise of possible rocks. The other story is about the hill where the obelisk now stands, this was where Newcastle and Lake Macquarie tribes would come to fight it out.
King Edward Park was established in 1850/1860 and was always government land, and eventually was put aside for the public. Although some councilors of the time felt the public were undeserving of such a cultural place. (again, some things never change). Newcastle was very much influences by miners and mining at the time and for many years thereafter and anything cultural was very much the minority and frowned upon.
Having said that once the park was established, it was well used for sports, promenades, a meeting and social place, and somewhere to laze about. There were struggles in getting well designed gardens in the 1880s and furthermore in the 1930s.

Ann had researched Close before when doing history on the Maitland area and decided to work on his biography. 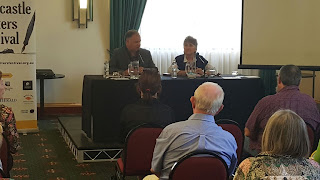 She detailed her research, explaining the online searching and libraries were a tremendous support in terms of information, but the best way of researching was to go to the source, so she has spent a bit of time travelling to places Close grew up, lived, and worked in. This is very detailed research, takes time, and also depends on the kindness of others along with serendipitous pieces of information.

Telling a biography of someone long gone is difficult and you have to bring that person to life.


She followed his early life in Bengal, India as the son of a silk trader, then his life throughout Europe as a engineer, until he arrived in Australia and found work up the coast in NSW through to Maitland and the Green Hills area. He asked Macquarie for some land near to that area to live on and that became in time Morpeth.
Posted by Cathy at 6:09 PM