OSCAR WATCH: the wrap up and Fashion

This was never going to be a regular Oscars show.

I wasn't sure what to expect, but I actually liked a lot of it. Many didn't, but you know, most usually diss the show, so what's new!?

It was a small, intimate location, with red carpet prior (albeit slow and minimised), only those nominated and a guest, plus presenters in the room. This was purely due to COVID, and I think it worked well. It meant less star factor, but it also meant more bang for your buck - so to speak.

Regina King opened the show with a fierce speech about all the issues (COVID, BLM, Me Too etc) and she was sensational. Not your usual opening, but there was no way they could have done a song and dance number. SO I am unsure why people are complaining so much. Plus she looked AMAZING, as soon as I saw her outfit, I made her best dressed! Woah!!!

The show itself mostly focused on the nominations, with some quirky stories about the nominees prior. There were no real segments, no songs. All they had was a music trivia segment, which was a bit off, but involved Glenn Close showing her knowledge (!?!) of hip hop and twerking. The humanitarian awards returned, and the In Memoriam was there. The choice of an upbeat Stevie Wonder song has been criticised but I actually thought it was a great choice. I love that song, it is about life and humanity and why should memoriam songs be downbeat?

There has been a lot of criticism about missing opening numbers, songs being sung etc etc. But none would be appropriate in these COVID times, are people really that stupid?

The entertainment, as always, came from the speeches. Whether they were emotional or hilarious, it didn't matter, there were some good ones. Yuh Jung Youn, the grandmother in Minari, was the funniest. Flirting with Brad Pitt, and letting everyone off for mispronouncing her name.

Who won, as expected, was a bit of a wild card. Upsets, and a spread of love to most movies, so no real frontrunner.

I had an all time low with 15 correct, and 8 incorrect. Also needs mentioning we only have 23 categories this year, rather than the usual 24. With Sound mixing and editing being moved into 1 Sound category. I was so sure Sound of Metal was the little film that was just lucky to be nominated, I didn't think it would get anything. I was wrong, it won Best Film Editing and Best Sound, the later should have been a no-brainer, but I was rushed this year I do admit.

When Mank got Cinematography and Production I was worried there was a groundswell and it might get Best Picture. It did not!

As predicted Nomadland won Best Picture and Best Director but also Best Actress for France McDormand. This was quite a surprise, because I sincerely believe both Viola Davis and Carey Mulligan gave far better performances. I love Frances, and she has 3 Oscars, it is great. I read a review of Nomadland this afternoon and it said the film was all about her, the two were inseparable, and the review got it right, how could she not have won. But still...

The biggest upset of the night was Anthony Hopkins winning over favourite, Chadwick Boseman. I am not surprised, I wondered whether Anthony might steal it at the last minute, he was my preferred choice and easily the better performance. Chadwick's was remarkable given how unwell it was, but he really was part of an ensemble cast, with him (or VIola Davis) getting more screen time than the others, maybe they were not Leads? Then people were all and Anthony Hopkins couldn't be bothered to come. Really!!??? Are the people who write these columns that stupid (of course they are!). He is an elderly man living in the UK, of course he wouldn't travel to a COVID hotspot at his age. And he was genuinely pleased and surprised, he put a lovely video up later. Go and watch The Father, that performance was absolutely brilliant.

The problem was the Academy made Best Picture the third to last award to be given, rather than the last, which has been the case for decades. Did they really think Chadwick would win and the show would end with that? Obviously, so at least we know the winners are definitely surprises that no-one knows about!

I will pop in some of my faves from the red carpet, but before I do I will end with a lovely quote from Chloe Zhao, the second woman to win Best Director, and the first person of colour to do so. "People at birth, are inherently good", we are, and let's try to remain that way!

If you want to relook at my predictions, see where I went right...and wrong, click here!

And a link to my reviews of the movies I did see! 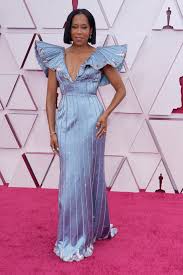 Regina King, Queen of the red carpet.
I cannot begin to tell you all how much I love this piece. 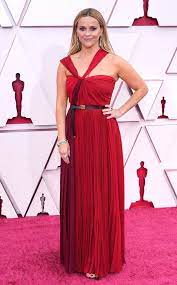 Reese comes in a close second, simplistic,
but great use of shape and colour, totally works 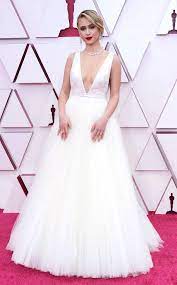 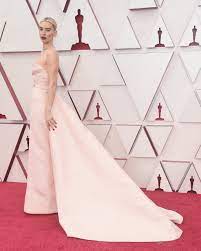 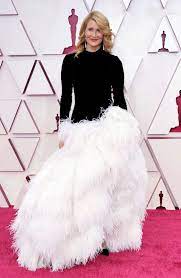 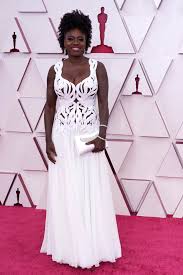 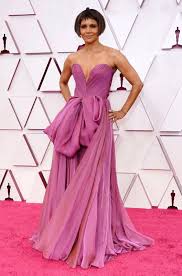 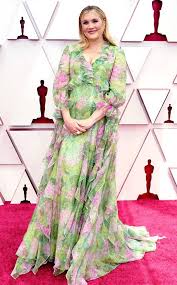 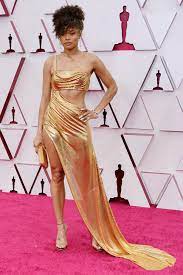 Andra Day, this actually works for her 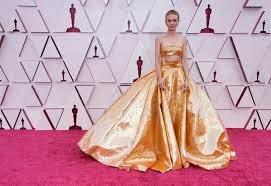 So not a fan of the boobtube, but it works on Carey,
seeing her sitting with that skirt fanned out was stunning though 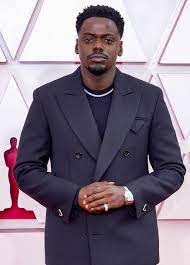 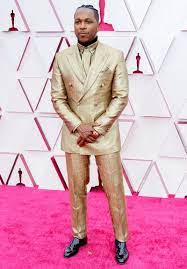 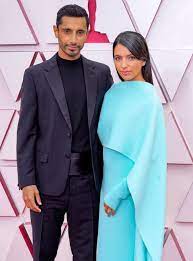 Riz Ahmed, swoon and great colour and shape on his wife 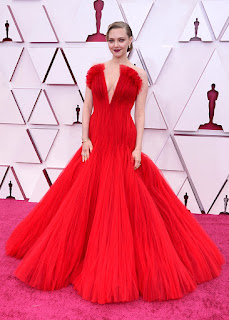 Amanda, Amanda, Amanda...I love the colour and the big skirt,
but the rest does you no favours whatsoever.
Not worst dressed, but certainly nowhere near best!
Posted by Cathy at 9:14 PM